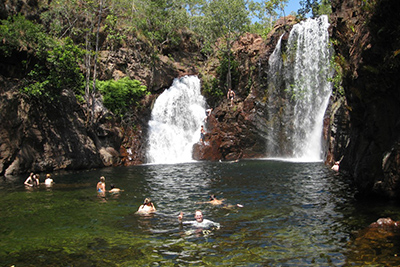 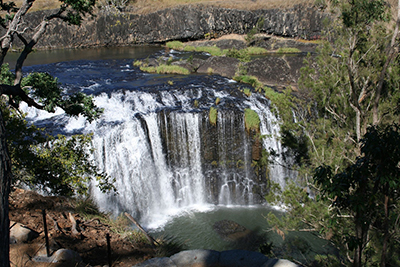 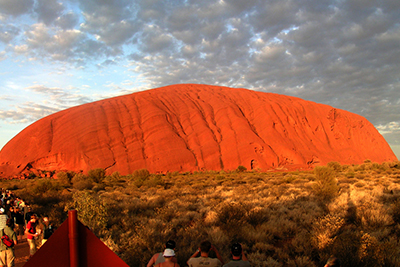 At the top of Australia, The Northern Territory.

Australia’s fabulous Northern Territory, a place rich in Aboriginal history and rugged, natural beauty. Experience the major city of  Darwin and it’s diversity of cuisines and cultures. Explore the rainforest and Aboriginal rock art of World Heritage-listed Kakadu National Park. Travel to the Red Centre town of Alice Springs, and make it your base while visiting the iconic wonders of Uluṟu-Kata Tjuṯa and Kings Canyon. Take a cruise down vast Katherine Gorge and pan for gold at Tennant Creek. Your Northern Territory adventure will unearth a huge array of wildlife, colourful outback characters and breathtaking landscapes.

Darwin prides itself on being both a laid-back, big country-town, and a sophisticated tropical capital city. Situated at the top end of ‘The Territory’, on the edge of the Timor Sea and with a harbour bigger than Sydney’s, Darwin is the centre of NT commerce and business, a hub of world-class natural and cultural attractions, and the gateway to Asia, with Singapore just a 4 hour, 20 minute flight away. 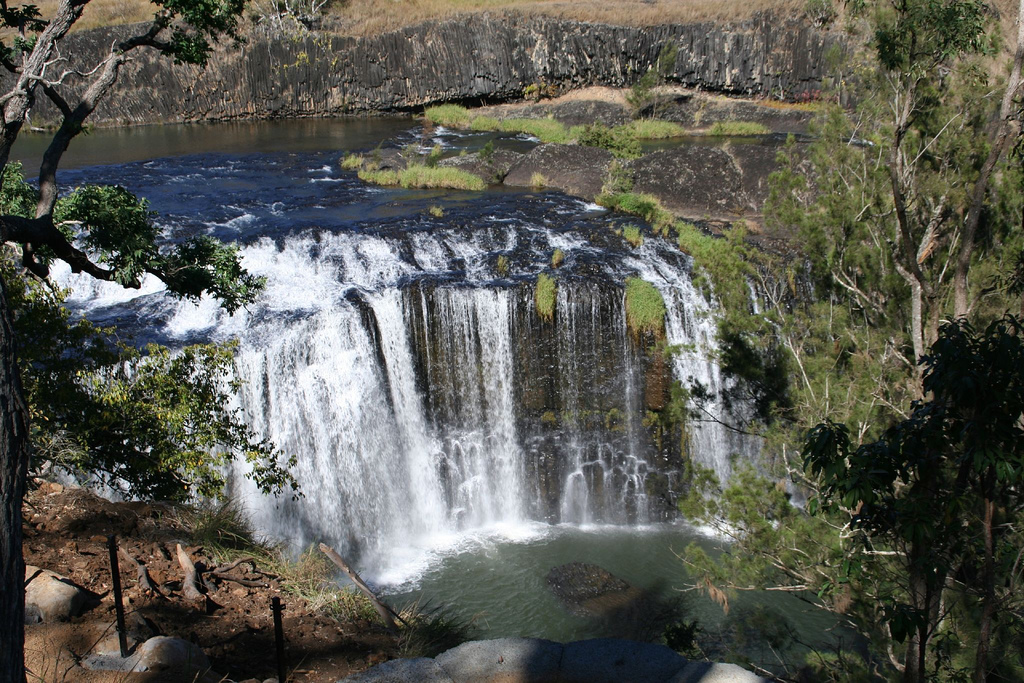 Teaming with wildlife and waterfalls, Kakadu is one of the world’s largest areas for accessible rock art an aboriginal artifacts. World Heritage-listed Kakadu National Park is about 2.5 hours from Darwin along the Arnhem Highway. Bush walk, through tropical rain forest, glimpsing rare and spectacular wildlife, and swim in the abundant  sparkling waterholes. Examine the many Aboriginal rock art galleries which will take you back tens of thousands of years to Australia’s first inhabitants. See Namarrgon, the Lightning Man at Nourlangie Rock and some of the world’s finest examples of X-ray art at Ubirr Rock in Kakadu’s north-east. North in wholly Aboriginal-owned Arnhem Land, you can fish off the spectacular beaches of the Gove Peninsula and in the creeks, reefs and ocean of the Cobourg Peninsula. Explore the eco systems of Mt Borrodaile with an Aboriginal guide and watch Aboriginal artists at work in the traditional community of Oenpelli.

This area offers insight into both Aboriginal and European history. At the Battery Hill Mining Centre you can pan for gold and explore an underground mine. Visit the Telegraph Station built in 1872 to link Australia to the outside world. Wonder at gigantic, precariously balanced boulders known as the Devils Marbles in the plains south of Tennant Creek, and at the Nyinkka Nyunyu Culture Centre you will learn about their cultural significance to traditional owners the Warumungu people. The nearby, tiny township of Ti Tree offers the opportunity to purchase genuine Aboriginal art, and don’t miss Australia’s UFO capital, Wycliffe Well. If you wish to stay for a while, you can stay on huge cattle stations north of town and in the vast Barkly Tablelands to the east and experience the true essence of the region. 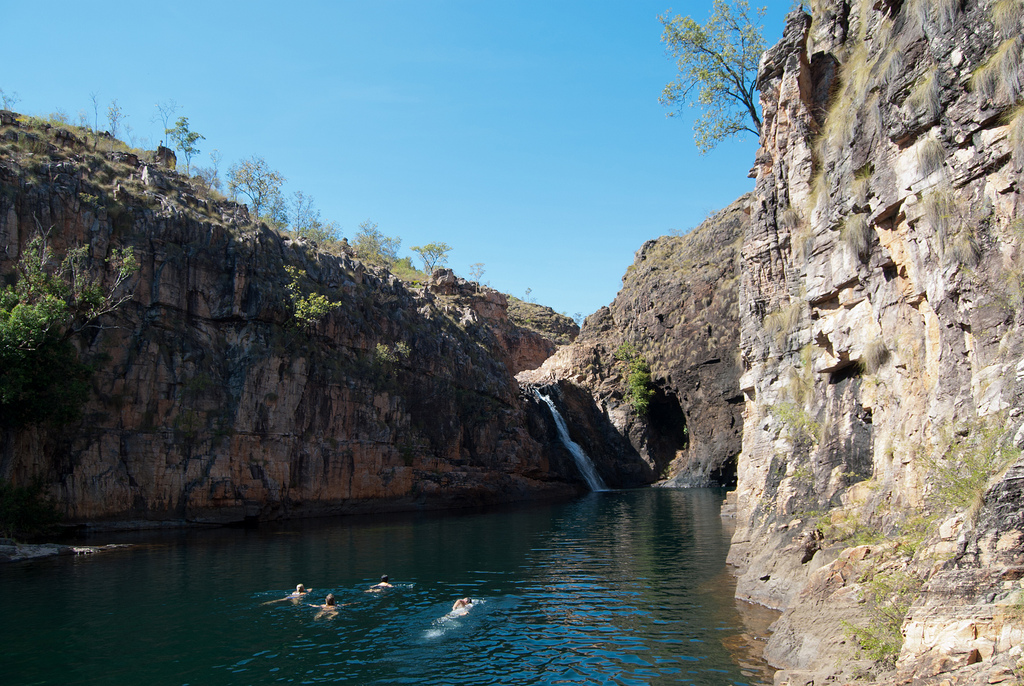 Explore the historic pioneering township of Katherine and see ancient Katherine Gorge in Nitmiluk National Park. Sink into the hot springs of Daly River and fish in the remote waterways of the Gulf of Carpentaria. Spot rare wildlife and wander gorges in Gregory National Park, in the Victoria River region, and relax in Mataranka’s sandy-bottomed thermal pool. Katherine’s rugged and ancient landscapes – which stretch from the Gulf of Carpentaria to the West Australian border – also invite you to canoe, bushwalk, bird watch, camp and four-wheel drive.

Stay in the famous outback town of Alice Springs, which sits in Australia’s red heart just 200 kilometres south of its geographic centre. From here you can bushwalk, four wheel drive or join a camel trek across the rolling sand dunes of the Simpson Desert. Trek through Ormiston Gorge and Pound, visit breathtaking Glen Helen Gorge and see rock wallabies at Simpsons Gap, all in the nearby East and West MacDonnell Ranges. Bike ride to Simpsons Gap at dawn, discover different Aboriginal art styles along the Tanami Track and explore the rock art, artefacts and ceremonial sites near the small Aboriginal community of St Teresa.

Lose your breath at Uluṟu, which rises 348 metres from the desert and matches the light and weather with shades so vivid they upstage the sunset. Learn about Uluṟu’s cultural significance as you walk around its base with an Aboriginal Anangu guide. Get up close to the grandeur of nearby Kata Tjuṯa – sacred russet domes formed through millions of years of erosion – on the Valley of the Winds Walk.In Watarrka National Park, you can trek to the rim of Kings Canyon and swim in a waterhole in the lush valley of the Garden of Eden. Walk to Kathleen Springs, drive the Mereenie Loop or soar over the canyon on a helicopter.

The Northern Territory’s Katherine region stretches from Dunmarra in the south to the Daly River region in the north. In total it covers an incredible 480,000 sq kilometres. From east to west it touches both the Queensland and West Australian borders. Katherine and its surrounds are the place to go for true outback adventure and indigenous experiences.

Bordered by Kakadu National Park, the Arafura Sea and the Gulf of Carpentaria, Arnhem Land is a vast unspoiled wilderness, rich in Aboriginal culture.